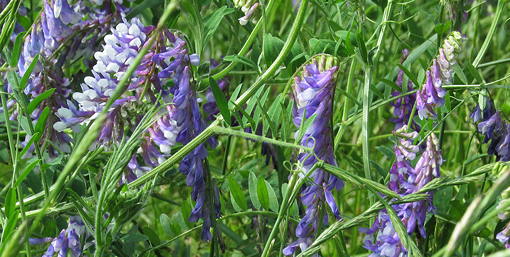 Why use cover crops? Cover crops repay the soil for the benefits we take. Just as our plants and animals nourish us, cover crops nourish the soil, returning the energy we remove as we harvest or graze. We could treat the soil like dirt, pouring on herbicides, pesticides and chemical fertilizers. Treat it as nothing more than an anchor for the roots. Alternatively, we can add sustainable sources of energy, such as soil amendments, organic fertilizers and cover crops that feed the soil instead of killing it. By nourishing the soil, we in turn enhance the health of our crops and ultimately ourselves.

Cover crops take up and store nutrients to be used by subsequent crops, suppress weeds, host beneficial insects, improve the structure and arability of the soil, and can even break up clay and hardpan. Most of all, when they are turned into the soil, they provide food and energy for the real farmers, the organisms that live and thrive in a healthy soil, feeding and caring for the plants. Use cover crops to create a system which renews itself, absorbing energy from the sun, taking up energy released by dying micro-organisms, and releasing it in the fullness of time to new generations of crops and microorganisms. Build a sustainable agriculture guided by intelligence and care and started from seed.

Persistent stands of grass and legumes are the cornerstone of any farm raising cattle, sheep or goats. Intensive rotational grazing allows the farmer to raise more animals per acre and reduces parasite loads, while maximizing the pasture’s potential as a carbon sink (see “Impacts of soil carbon sequestration on life cycle greenhouse gas emissions in Midwestern USA beef finishing systems” in Agricultural Systems, May 2018 issue.). For best results, reseed or overseed your perennial pastures at least once every 5 years. The University of Wisconsin offers an excellent guide to intensive rotational grazing. Pasture species are selected for hardiness, persistence under heavy grazing and traffic, and nutritional benefit.

In New England, even with an ambitious program of pasture stockpiling, most livestock producers will need to make (or buy) hay while the sun shines to feed or bed their animals through the snowy months of deep winter. Species for perennial hay are selected for hardiness, yield, ease of drying, palatability, and nutritional benefit. Begin your first cut as early as possible. Hay is at its prime when the plants are in the early flowering stage—while grass yields will increase after this point, quality and digestibility will decline sharply. An early first cut also increases the chance of getting that prime leafy second-cut hay in August or September. Your animals will thank you.

Haying removes nearly all the aboveground portion of the plant, so it removes large amounts of organic matter and plant nutrients from the field. It is important to replenish these by returning your livestock’s manure to your hay ground in generous quantities. If hay is sold off the farm, manure should be imported. Conduct soil tests regularly! Well-composted finely textured manure may be spread after the first cut and then tedded to encourage it to sift down through the stubble; this can dramatically increase second-cut yields and may reduce nutrient loss to runoff and gaseous losses compared to fall spreading. Spreading a source of micronutrients, such as azomite or kelp, will make your hay more palatable and richer in nutrients, and may increase yields as well.

Producers seeking higher yields, top-quality feed, and more rotation options in their field crops have begun turning more often to annual forages. These stands may be used for grazing, ensiling, baleage or dry hay depending on your situation and equipment. Annual forages may also be used to help establish perennial hay or pasture, protecting the slower-growing perennials while allowing a harvest the first year.

The local-foods movement has fueled a renaissance in grain-growing throughout New England. There is a ready local market for food-grade grain suitable for brewing, bread and other baked goods; larger-scale growers are selling to specialty mills, while smaller growers are having grain custom-harvested and then milling their own “estate-grown” flours for sale at farmers markets. Many grains may even be grown in small gardens and processed with minimal investment for home use. Click here for small quantities (4 oz and less) of specialty grains for people.

Packed with energy and relatively easy to store, grains are a practical and efficient source of feed on many livestock farms. Grains are essential to growing hogs and poultry, whose single stomachs are not designed for a high-fiber forage-based diet; grains support high milk production, speed growth rates, and improve body condition in ruminants, especially during the winter when energy demands are higher and forage quality lower.

Up here in the corner of the country, we are on the wrong end of the grain pipeline, subject to the whims of the commodity grain markets and the ever-increasing cost of trucking. While we have lost much of the grain-handling infrastructure we had back when Aroostook County was the “breadbasket of New England,” there is a resurgence of interest in grain growing, not only for bread but also for feed, as grain growers seek profitable crops to grow in rotation with bread wheat and livestock growers seek to exercise more control over their costs and their feed rations.

Many cover crops also provide forage and habitat for bees and other beneficial insects! This can mean better pollination—and better yields—on fruiting crops like pumpkins, squash, melons, apples, plums, pears, raspberries, blueberries, and more. Consider planting any of these on “idle” ground as a gift to your bees.

Please note that buckwheat, radish and mustard will readily self-sow if permitted to go to seed, and volunteers may cause problems in subsequent years. Allow the plants to reach full bloom for the bees, but watch them closely and mow or till under before the first seeds mature. Planting a number of different cover crops that bloom at different times of the season will ensure that your bees have a constant source of food.

You can’t quite plant your entire yard to vegetables, herbs, flowers, berries and fruit trees, because then there would be no place for your reclining lawn chair and bocce tournaments. Try the offerings below for a low-input easy-care attractive lawn.