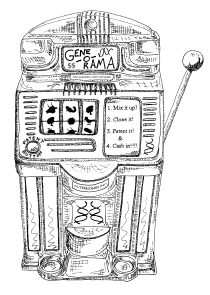 At our 1996 Annual Meeting we voted unanimously not to knowingly offer for sale any genetically engineered variety because the new gene technologies pose unacceptable risks to the environment. In 1999 we affirmed and clarified that position and will follow the guidelines of the Organic Materials Review Institute (OMRI) which prohibit the use of genetically engineered organisms in organic crop production. OMRI uses the National Organic Standards Board (NOSB) definition of genetic engineering.

Please note the word “knowingly.” Because of the possibility of contamination, over which we have no control, our pledge necessarily stops short of being an absolute guarantee. Although we will not sell any variety represented to us as genetically engineered, and we refuse any lot of seed that tests positive for GMO content at the lowest detection limit of 0.01%, we will not be held legally responsible if any of our seed tests positive for genetically modified organisms. We apologize for having to split legal hairs, but we all share the reality of genetic drift.

We test beet, chard and corn seed for transgenic contamination.

Along with more than 150 other seed companies, we have signed:

Agriculture and seeds provide the basis on which our lives depend. We must protect this foundation as a safe and genetically stable source for future generations. For the benefit of all farmers, gardeners and consumers who want an alternative, we pledge that we do not knowingly buy or sell genetically engineered seeds or plants. The mechanical transfer of genetic material outside of natural reproductive methods and between genera, families or kingdoms, poses great biological risks as well as economic, political and cultural threats. We feel that genetically engineered varieties have been insufficiently tested prior to public release. More research and testing are necessary to further assess the potential risks of genetically engineered seeds. Further, we wish to support agricultural progress that leads to healthier soils, genetically diverse agricultural ecosystems and ultimately people and communities.

In the intervening year since President Obama signed the DARK Act (Deny Americans the Right to Know) into law, not much has happened except that it has effectively preempted states from enforcing or enacting their own labeling laws for genetically engineered foods. The Federal labeling law, considered by many to be labeling in name only, tasked the USDA with conducting research to determine what labeling process would be best for consumers, agricultural industries and food manufacturers. The law gives the USDA nearly carte blanche and two years to define and implement mandatory disclosure and labeling procedures. They are more than halfway through their process, which can be followed at https://www.ams.usda.gov/rules-regulations/be.

However, as science continues to push boundaries, the whole backdrop to such a labeling law has changed. A decade ago, Pat Mooney of ETC Group said, “Today scientists aren’t just mapping genomes and manipulating genes, they’re building life from scratch and doing it in the absence of societal debate and regulatory oversight.” And today “gene-edited” foods, created with new tools that clip and tweak the “right” locations in a DNA sequence, are in the news and in the ground. Potatoes that don’t brown when cut, waxy corn, soybean oil with a different fat content—hundreds of acres of gene-edited crops are currently grown in several states and fall largely outside current regulations since they don’t meet the current definition of genetic modification. The agribusiness interests involved have already mobilized even before these crops get to market and regulations are developed. They are conducting consumer focus groups and creating animated videos to mollify and exterminate expected fears.

And it’s not stopping there: ETC Group, which has long moni- tored the Gene Giants (who aggregate control over seeds, agrochemicals, phar- maceuticals, biotechnology, genomics, food processing and retailing), now notes that many of the same large corporations are touting the use of new technolo- gies—including genomics, nanotechnology and synthetic biology—to transform biomass into high-value products or to manufacture materials “from the bottom up” despite environmental and ethical concerns. To find out more, go to etcgroup.org/issues.

We Test Corn Seed and Beet Seed for Transgenic Contamination

Since 2000, we have employed industry leader Foodchain ID (formerly Genetic ID) for our GE testing. We remove any lots that test positive for transgenic contamination.

A negative test result does not guarantee genetic purity but improves your chances that the seed is uncontaminated. These tests are expensive, but in a time of genetic roulette, they are necessary though not sufficient to assure seed purity. Only if the seed trade takes an adamant position that we will not tolerate GE contamination in our product can we maintain any integrity in our seed supply.

Links to: Articles by CR Lawn about genetic engineering.