Skip to main content
☰ Ordering will resume for Fedco Trees when we release our 2022 catalog, in early October 2021. 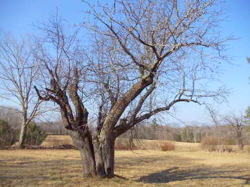 Whether they be abandoned heirlooms or wild seedlings, tucked in the woods or growing alongside an old road, apple trees live on for hundreds of years. More and more people are renovating these old —and sometimes forgotten— trees, not only to enhance production and fruit quality, but also as an act of reverence.

Cut out dead branches and limbs any time. Cut back cleanly to living wood, but avoid cutting into it. In winter prune the entire tree following the directions below, or use a good book on fruit tree pruning, such as Cass Turnbull's Guide to Pruning.

Remove competing trees and shrubs to let in light and reduce competition. If the tree is in a heavily wooded spot, don’t cut out all competing vegetation in the first year or you may stress the tree with too much sun all at once.

Ancients Rise Mix, our unique blend of rock powders, trace minerals, biostimulants and humic acid is formulated to enhance the soil Cation Exchange Capacity (CEC), build humus, and condition the soil in which the ancient roots reside. Apply one bag per old tree; best if spread at the tree’s drip line and several feet beyond. If you wish, you may add 7-14 cubic feet of compost; Rainbow Valley or Coast of Maine Quoddy Blend are both good choices. No need to work anything into the soil—just cover with a thick layer of woody mulch. Can be applied in fall or spring, ideally in conjunction with a thoughtful pruning program. Ancients, rise!

Old, abandoned or semi-abandoned apple trees occur throughout Michigan. Often the cultivars are very old and are no longer grown commercially. Many of them, however, if properly managed, could produce good fruit for use by homeowners for fresh eating or for processing into applesauce, apple jelly, apple butter or cider. When trees of desirable cultivars are near residences, people are often interested in attempting to care for them so the fruit can be used.

Often the old trees are 25 to 30 feet tall and have not been pruned for many years. The average homeowner is simply not equipped to spray and care for them, so the fruits produced are generally small, diseased and severely damaged by insects. A tree that is reasonably structurally sound may be renovated and brought back into production. The trunk should not be severely rotted, and large lateral limbs should not be hollow. Unsound trees can be successfully renovated but they will not live as long.

Once the owner has decided that a particular tree or trees are worth keeping, how can he/she bring the trees back into production with quality fruit and, at the same time, reduce the tree size to make them more manageable? In some cases, aesthetic value may also be a consideration. The following renovation procedure is suggested. 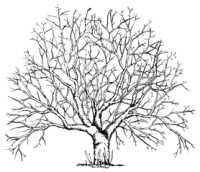 Figure 1. The typical abandoned apple tree is very tall with many weak and dead or dying interior limbs.

An abandoned or semi-abandoned apple tree is generally very tall and very thick and contains a large number of dead or dying limbs inside the canopy (Figure 1). Such a tree is obviously unmanageable and its size needs to be significantly reduced. Very severe cuts can be made without doing permanent damage. Latent buds within the tree will produce new, very vigorous limbs to replace old, weak ones.

Figure 2. An unpruned, abandoned apple tree showing several water sprouts (new growth within the past 2 to 4 years). Note the smooth bark on these limbs. Older limbs have scaly bark. Leave some of this young growth to begin the new tree structure.

Study the main limb structure of the tree closely before deciding where to make cuts. Try to locate some relatively new water sprout-type of growth in the lower portion of the tree that can be left to produce part of the new tree structure. Water sprout growth is identified by very smooth bark that indicates it is new growth that has occurred within the past two to four years (Figure 2). Older limbs will have heavy, scaly bark and generally should not be saved.

Figure 3. The first severe pruning of an abandoned apple tree. Note that some newer water sprout growth was left on this tree and large limb cuts were made 8 to 12 inches above the origin of these small branches (A). Also, note that the terminal ends of the small branches have been cut back infavor of more outward growing laterals (B).

Renovation is best done in early spring, usually in April. If water sprout growth can be found in the lower areas of the tree, remove all the old, large limbs about 8 to 12 inches above this new growth (Figure 3). This is most easily accomplished with a chainsaw. Undercut these large limbs slightly before removing them so that they don't tear the bark severely when they fall. The old limbs will generally be very large and heavy. Be careful that they do not break off the shoots you intend to leave when they fall to the ground. When making the severe cuts on old limbs, try to cut them more or less perpendicular to the ground. Cuts that face upward will collect and hold water from rainfall, causing ice damage in winter and decay in summer. Paint these large cuts with white outdoor latex paint within a few days to protect the wound from the weather. Outdoor white latex paint is not toxic to the tree and seals moisture out, preventing decay. 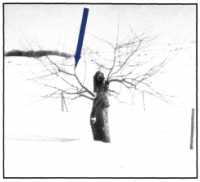 Making the major limb cuts will generally remove a significant portion of the old tree. The root system under such a tree is very extensive and will produce much new top growth the first season, so avoid fertilizing the tree the first season after cutting. Trim back the shoots left on the main cut limbs so that new growth will be forced outward. Usually this means cutting off the upright shoots in favor of a lateral limb on the shoot (Figure 4).

Figure 5. In the second spring, many small limbs produced the first summer are removed, leaving only the most desirable. Note that the upright portions of new shoots denoted by dotted lines should be removed to prevent the tree from becoming too tall.

By the end of the first growing season, this severely pruned tree will have produced large numbers of new, vigorous shoots. In the second spring (usually April), most of these new shoots should be removed, leaving only those in desirable locations that can be trained outward. The shoots that are left as permanent limbs should then be headed (the top portion removed) to a more lateral limb parallel to the ground (Figure 5).

Figure 6. By the spring of the third season, the tree has now produced many new, vigorous branches and is capable of producing a small crop of fruit. Note that many of the small limbs left the first spring have developed to relatively large, productive structures.

During the second growing season after the severe pruning, very vigorous new growth will again occur, producing a tree very similar to that shown in Figure 6.

In April of the third growing season, many of the new shoots produced during the second growing season should be thinned out, leaving only the most desirable limbs chosen earlier. The limbs left should also be tipped again to promote more lateral rather than upright growth. Generally, a small crop of fruit is produced the third year. 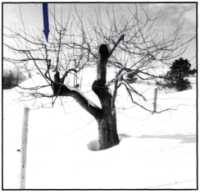 Figure 7. A renovated tree after three full growing seasons. Note the productive capacity of this "rebuilt" tree. Also note where cuts have been made to force outward rather than upright growth.

The new tree structure produced using this pruning method will generally result in a tree 12 to 15 feet tall, or about half the height of the original tree. All the growth on this new tree is also quite vigorous and will produce good crops of large, high quality fruit. The reduced tree size will also make the tree much easier to spray and manage (Figure 7).

Each succeeding spring, remove some limbs and thin the growth on permanent limbs to prevent the tree from getting too thick. The shading that will result from underpinning will reduce fruit production and cause weak growth in the inner portions of the tree.

This system of renovating old apple trees is very severe but has proven to be very successful in producing smaller trees with good production of high quality fruit. These trees can also be maintained relatively easily for many years.

This information is for educational purposes only. Reference to commercial products or trade names does not imply endorsement by the Cooperative Extension Service or bias against those not mentioned. This bulletin becomes public property upon publication and may be reprinted verbatim as a separate or within another publication with credit to MSU. Reprinting cannot be used to endorse or advertise a commercial product or company.
(New) 5/86, lOM-kMF-JP